For the past few months, the development of Dew language has been going on smoothly. The language implementation is now mostly completed except for a few things like high-level optimizations and game-specific features. I am now using Dew everyday to produce some simple and interesting animations here. At this point, the foundation of language implementation now feels pretty solid; and the language design feels also great, so that I can think and program at a very high level when creating the animations.

In the last few weeks I got multi-core parallelism working properly with Dew, which is a really exciting feature. Parallelism in Dew requires minimum effort to use: the programmer just needs to mark some external function calls to be asynchronous, and then the functions will be automatically called from threads in different CPU cores for parallelization. The performance is also great, and benchmarks show it can scale well to a large number of CPU cores.

I have had parallelism in mind ever since very early design stages. A stream-based language lends itself naturally to parallelism, since each stream can be evaluated separately from each other. While parallelizing such languages may seem easy to do in theory, a language implementation has to work with many low-level details exposed by the operating system and the hardware to be efficient. In this blogpost, I am going to talk about implementation strategies involved to make Dew efficient in parallelism.

I use one ‘logical’ thread for each of the Dew streams. The number of streams could be very large. In a benchmark I am able to get 500000 simple streams running sustainedly within the time budget of a typical game. Before I make these logical threads run parallelly, I first consider how to make them run concurrently.

The naive approach to get concurrency is to use preemptive threads provided by the operating system, but it is well-known to have a high overhead, and can’t support the large number of Dew streams. Therefore I have to implement a mechanism to run these logical threads concurrently within a single OS thread, and switch among these logical threads cooperatively.

I chose stackless coroutines for Dew implementation. Stackful coroutine is easier to implement and may have more efficient function calls, but it requires a call stack allocated for each of the coroutines, costing both memory usage and CPU cache utilization, and is unacceptable for the large number of logical threads.

This is not the only customization that I did to LLVM/clang. A custom LLVM may sound overwhelming work, and but it’s not actually so scary once I got familiar with the LLVM code base. For this particular CPS transform pass I added to LLVM, I was able to reuse the hard work already done for the LLVM coroutines, and the implementation is actually quite simple. The main part of the CPS transform only has 300+ lines of C++ code.

With the logical threads ready to be run concurrently in an OS thread, the typical approach to get parallelism is to use a pool of OS threads, and each thread at one time picks a pending logical thread to run. This approach is known as N:M threading, and is used by many other programming languages.

For example, consider the following contrived example, func1 is an external function defined in the game engine, and is called twice for each Dew frame.

If we want to parallelize the two func1 calls, we only need to make a very simple change:

In the above code, the async operator means that we want the asynchronous version of external function func1.

The reason why I didn’t follow the typical N:M threading approach is that Dew is intended for game scripting and not a general purpose programming language. When programming with Dew, most costly computations are expected to happen in the game engine, and not directly in Dew programs.

Compared N:M threading, my approach of asynchronous external calls has the following advantages:

To further reduce number of tasks dispatched to the thread pool, I group asynchronous external calls into batches. When the Dew runtime sees an asynchronous external call, the runtime delays its dispatch for a while, and only dispatch it to the thread pool when it has been delayed for too long or the runtime has collected sufficient number of calls for a batch.

In the thread pool, each thread is pinned to a single logical CPU core. The thread pool uses a single multiple-producer/multiple-consumer (MPMC) queue for distributing tasks. I avoided synchronization primitives provided the operating system, and used atomics to reduce synchronization overhead. My implementation of asynchronous external calls requires a temporary buffer for each call, and to eliminate false sharing, I allocate these buffers linearly from a dedicated asyncheap, which is cacheline-padded between two asynchronous external call batches.

Not only Dew is parallelizable within a single instance, the runtime is carefully written so that different Dew instances can be run on different OS threads for parallelization.

Benchmark is done with a simple Dew program.

After the initial setup, main will be a list of nchunks streams, each of which does an asynchronous call dowork into to game engine for each Dew frame.

Each makework call returns a newly allocated cacheline-aligned memory block. And dowork is defined on the game engine side in three different ways for testing different workloads.

For the following benchmark results, nchunks is fixed at 30000, the asynchronous calls are dispatched in groups of size 100. 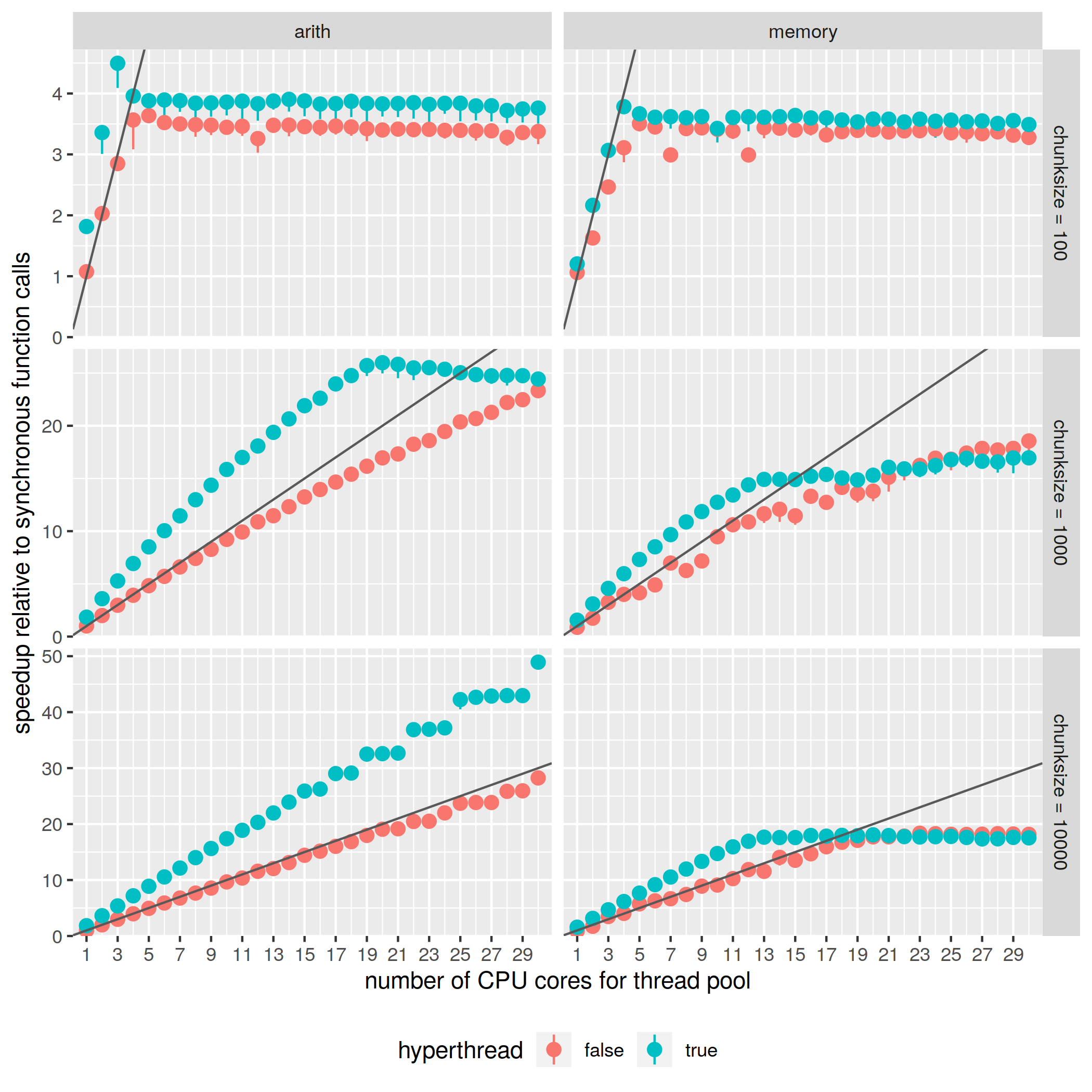 At the first glance, the results doesn’t look good for chunksize=100. But at 4 cores with hyperthreading enabled, each frame already costs as low as 1.80ms, which is very close to the baseline result of 1.62ms, where workload is changed to none and other conditions remain the same. So most of that 1.80ms is spent on the sequential code and synchronization overhead that can’t be parallelized. By Amdahl’s Law, it’s normal to see it doesn’t scale well. However, I don’t consider this to be a performance drawback for Dew, because 30000 asynchronous calls are already quite a lot for one game frame. It’s more likely to see bottleneck elsewhere if more than 30000 asynchronous calls are required.

Another performance degradation is observed with the memory workload when the number of CPU cores used is large. This is probably because of hitting RAM or CPU cache bandwidth limits, and we can do nothing about it here on the level of Dew implementation.

Other than these two issues discussed, the benchmark Dew program scales almost perfectly.

To see the impact of cache locality loss, the work function in the benchmark is modified as follows:

It’s clear that cache locality loss does hurt a lot when there’s a single thread in the thread pool, but as more threads are available, the performance actually scales fine. The maximum speedup being only 3 does not look like an issue, because at speedup = 3 the frame time is already as low as 1.2ms.

Performance has been a very important goal when implementing Dew. Performance by itself is not interesting; but with better performance, I can create more complex game scenes, programmed with higher level constructs.

Due to physical limitations of CPU chips, we will see more and more cores in a single CPU. Parallelism was already a recognized important problem at the time when Dew was initially conceived ~8 years ago, but somehow CPUs with a large number of cores never got quite mainstream until very recently. Now the top-end of consumer CPUs from AMD have 16 cores, and CPU with 8 cores is a pretty standard configuration for a gaming PC.

I previously had a failure when implementing a stream-based framework, so I was expecting difficulty in implementing parallelism for Dew, but the actual implementation turned out to be even more difficult. I learned many low-level things like CPU cachelines and memory fences along the way. With Dew parallelism working, the efforts all seem worthwhile.